AWARD. Ralitza Petrova's feature debut "Godless," a story depicting the harsh life in a remote Bulgarian town, was honoured with the main prize at CPH PIX, a festival with a keen eye on new directors.

Winning the CPH PIX top award on Friday, 4 November, was Ralitza Petrova's Bulgarian-Danish-French "Godless." The New Talent Grand PIX, which underlines the Copenhagen festival's focus on new talent and debuting directors, was presented by the jury who stated in its motivation:

"Godless" is set in a remote Bulgarian town where a nurse looks after the elderly with dementia while trafficking their ID cards on the black market. Things start to shake up as a new patient unlocks her drugged-up conscience, and she is ready for change. But doing "the right thing" comes at a high price.

The CPH PIX prize adds to a notable run on the festival circuit since the film world premiered in August at Locarno Film Festival. Here, "Godless" carried off the Golden Leopard, the Prize of the Ecumenical Jury and the Swiss critics' award, as well as the title of Best Actress to Irena Ivanova, playing the dispirited nurse. Ivanova, making her screen debut in the film, was also honoured at the Sarajevo Film Festival and at Bulgaria's Golden Rose festival, the latter naming "Godless" Best Feature Film.

Screening at the Toronto Film Festival in September, the film is now returning to North American screens, to enter in the AFI Fest competition in Hollywood from 10 November.

"Godless" is produced by Rossitsa Valkanova for Klas Film, and Danish co-producers are Eva Jakobsen, Katrin Pors and Mikkel Jersin of Snowglobe. The film's eerie atmosphere is in great part attributable to Peter Albrechtsen's sound design, and some of the post production took place in Denmark. Read our Snowglobe profile Shaking It Up.

The film has received funding from the Danish Film Institute's fund for minor co-productions. Read more How to co-produce with Denmark

All prizes at CPH PIX

Read about the winners 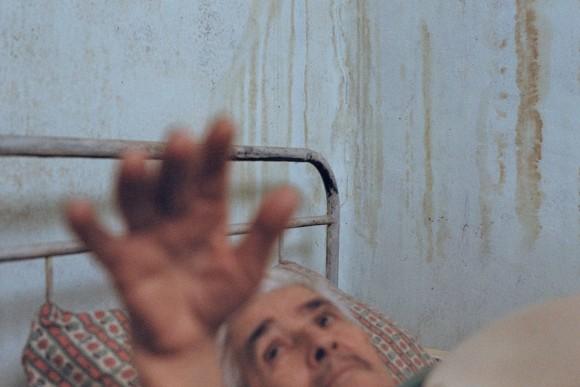 In a remote Bulgarian town, Gana looks after the elderly with dementia, while trafficking their ID cards on the black market of identity theft. At home, she provides for her jobless mother, with whom she hardly speaks. Her relationship with her car-mechanic boyfriend is no shelter for love either - with sexual attraction vanished, intimacy is reduced to an addiction to morphine.