A Place in the Sky

THE OSCARS. "The 2014 short-film Oscar nominees are among the most artful and emotional in years," writes Los Angeles Times critic Betsy Sharkey. Anders Walter's live action short "Helium", about the liberating forces of storytelling, is among her favorites.

Heaven is a magical place called Helium in Anders Walter's Oscar-nominated short about a young boy in hospice care. Alfred becomes friends with the janitor, Enzo, who tells stories about a poetic realm beyond this world, of floating islands in a sea of clouds. A place in the sky where sick boys will go when they become too ill to remain at the hospice.

"The film is almost magical in the way it moves between the reality of the boy's life dimming and the janitor's determination to finish the fable," says Betsy Sharkey of Los Angeles Times. "A great humanity and heart, adeptly underplayed, in every frame."

Danish films at the Oscars 2014

Late Sunday night, Danish time, it will be decided whether "Helium" takes home an Oscar for Best Live Action Short.

Two other Danish films are contending for the coveted statuettes – Thomas Vinterberg and Zentropa's "The Hunt" and Joshua Oppenheimer's "The Act of Killing," produced by Signe Byrge Sørensen for Final Cut for Real.

All three films received support from the Danish Film Institute.

Anders Walter has worked as an illustrator and comic book artist since the age of 17 and has directed music videos. He came in contact with M&M Productions, as he was working on a few ideas for short films and knew that M&M Productions, three-time Oscar winners in the Live Action Short category, focused on telling good stories in the short format.

"When I write stories, there is always an element of magical realism. The kind of magical realism that characterizes 'Helium' was a huge part of my own childhood and adolescence," Anders Walter says to the Danish daily Politiken.

Pointing to "The Brothers Lionheart" by Astrid Lindgren as a tremendous inspiration, Walter ads that, when making films for children, there is no contradiction in celebrating life while addressing its serious issues.

"Helium" is produced by M&M Productions who won the Oscar in the Live Action Short category on three previous occasions – for "Election Night" in 1999, "This Charming Man" in 2003, and "The New Tenants" in 2010.

Born 1978. Has lived of drawing since he was a teenager and worked for a number of major advertising agencies. Created the comic book series "Solas", illustrated novels and designed movie posters. Has made music videos plus the three short films "The Talking Suitcase", "9 Meter" and the Oscar-nominated "Helium". 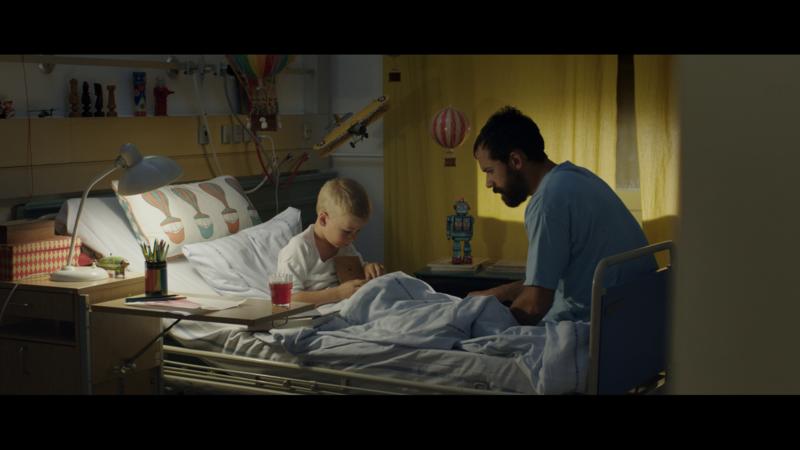 A young boy Alfred is dying, but through the stories about Helium - a magical fantasy world, told by the hospital's eccentric janitor Enzo, Alfred regains the joy and happiness of his life, and finds a safe haven away from daily life.