Premiere of The Killing III

TV SERIES. Sarah Lund has returned to the Danish television screens on Sunday nights. This time she reluctantly sets out to solve an apparently random killing of a sailor, while the financial crisis, a looming national election and a shipping industry in difficulty serves as an obscure backdrop. Danish critics are thrilled.

1.6 million Danes – a share of 60 percent – were glued to the television screen when the third season of DR's drama series "The Killing" premiered Sunday night.

"Something of a nail-biting game and a mildly frantic reunion with the British royal family's favorite crime series and detective. And let's say it briefly in modern Danish: It's fucking fabulous."

In the first episode, a burnt out Sarah Lund celebrates her silver anniversary in the police and is hoping for a quieter job in the analytical department. But her plans are spoiled when an apparently random killing of a sailor turns out to have political implications when the trail leads to a ship owned by Zeeland, the giant shipping company that carries a significant share of the national economy.

According to the Danish critics, "The Killing III", neither crisis nor burnout has reached the makers of the series.

"Whew. Something of a nail-biting game and a mildly frantic reunion with the British royal family's favorite crime series and detective. And let's say it briefly in modern Danish: It's fucking fabulous. The acting works in its own sluggish fashion. The scenery is a dark and demonic seamy side of Copenhagen with overgrown shanty towns in the shadow of big business glass palaces. In such a morass it takes a bold and honest woman with a heart of gold: Sarah Lund," writes Politiken's Henrik Palle and gives 5 out of 6 stars.

"She (Sofie Gråbøl, ed.) is a superb and utterly distinctive actor with a style that is psychologically mute and yet has spontaneous flashes of pent-up pathos when she eventually loses temper. A slightly autistic, but effective Scandinavian police girl who even in the middle of the dinner cancellation from his son and his girlfriend is disinterestedly locked in her file. She is the cold virgin with anarchistic karma who now and then still becomes a warm valkyrie on the wings of crime," writes Bo Tao Michaëlis in the film magazine Ekko and gives 4 stars.

"The financial crisis is the dark, ruthless backdrop, the series plays out in - effectively outlined already in an introductory audio clip from a radio news that hovers over the city's rooftops. The dialogue drips of crisis with casual remarks on budget meetings with the police, capsized Latvian shipping companies, bank failures and foreclosures. Followed up visually by dark clouds over the deserted harbour area, windswept landfills, and homeless people huddled in the darkness, now as before, the series' hidden lead actor," writes Berlingske's Jakob Steen Olsen and gives 5 stars.

"Yet again, 'The Killing', which since the first episode has been one of the best new Danish drama series, begins so evocatively and effectively that you can hardly wait for the next episode," concludes Christian Monggaard in Information.

The British critics who have caught a sneak peak of the series are just as ecstatic as their Danish colleagues. Read The Guardian's review and The Telegraph's review

Main writer of "The Killing III" is Søren Sveistrup, andconcept director is Mikkel Serup. The series is produced by Piv Bernth for DR. Screens Sundays at 8 PM at DR1. Expected premiere at British BBC4 in November. 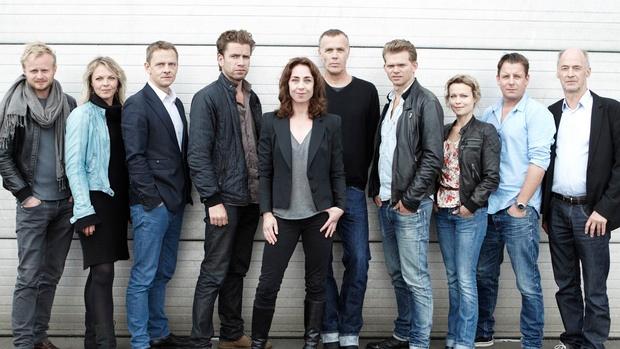 At first it looks like just another random killing of a sailor, but this case takes Sara Lund into the heart of the financial world in Denmark, through the highest governmental offices as well as high society in gneneral. Everywhere people have been changed by the global financial crisis and her findings shows a lot of society's darker sides.