Ask Hasselbalch is upping the ambition in the sequel to his hit children's film Antboy from 2013 while sticking to his credo of meeting his audience at eye level. In Antboy – Revenge of the Red Fury, our young superhero has grown into a teenager who falls in love for the first time.

Danish cinema got its first superhero in 2013, when Antboy's apple-cheeked, 12-year-old Pelle was bitten by a mutant ant, giving him ant power out of all proportion to size.Same with the film. Antboy, a first-time feature made on a modest budget, was sold to 35 countries, got favourable reviews in The Hollywood Reporter and the Los Angeles Times, won the Danish film industry's prestigious Robert award for best Danish children and youth film, and sold an impressive 175,000 tickets at Danish cinemas.

"We had to make a film that corresponded to where the children are, now that they have lost some of their innocence and are becoming teenagers."

"We had to make a film that corresponded to where the children are, now that they have lost some of their innocence and are becoming teenagers."

Expectations are obviously high for the sequel, Antboy – Revenge of the Red Fury. The film follows Pelle, now 13, as he not only struggles to balance life as an ordinary school kid with his not so ordinary secret life as a superhero but also feels love for the first time, with all that it entails. But that's nothing compared to what happens next, when the girl Maria turns the full force of her wrath on him, as her image of Antboy the superhero is gravely shattered.

Antboy – Revenge of the Red Fury

Pelle gained his superpowers when he was bitten by a genetically engineered ant. As Antboy, he can lift many times his own weight, climb on walls and pee acid – if he's fed enough candy bars, that is.

In Ask Hasselbalch's sequel our young hero is more popular than ever following the defeat of his archenemy The Flea. His greatest desire is to be more than just friends with Ida. Meanwhile, Antboy faces an even greater foe than before. Christian, the new boy at school, will stop at nothing to steal Ida away from him. As if that wasn't enough, Antboy finds himself haunted. A new supervillain has taken the stage. The two Antboy films are based on a popular book series by Kenneth Bøgh Andersen, adapted for the screen by Anders Ølholm.

Antboy director Ask Hasselbalch is well aware of the challenges he was facing.

"One of the charming things about the first film was that the children were so young. And because we didn't have the budget to do any wild effects, we worked a lot on the humour and the timing. We charmed our way out of it," the filmmaker says.

"But for all sorts of reasons we couldn't just repeat ourselves and do the same fun, charming film over again. We had to make a film that corresponded to where the children are, now that they have lost some of their innocence and are becoming teenagers. New things are in play. So we took the film in a darker direction style-wise," Hasselbalch says. Spielberg films from the 1980s and movies like Gremlins were role models for the first film, which was shot in the fall, while The Red Fury is a winter film with a colder colour scale inspired in part by Alfonso Cuarón's Harry Potter films.

Still, there is no denying the influence of American '80s movies on Revenge of the Red Fury, which takes the world of children seriously in an unpretentious way.

"What characterises Spielberg is that he hasn't forgotten what it's like to be a kid. Nor do I think I have completely forgotten, either," Hasselbalch says. "I always try to meet the children where they're at in their lives, talk to them like they're my friends. Cinematically, this is expressed in how the camera always stays at the kids' eye level. We never look down on them." The same principle applies to the casting. "I pick the children I can speak to in a normal way. Then they don't feel talked down to, either."

No Use of Innocence

The director never rehearses scenes in advance with the children. Instead, he talks each scene through with them and lets them work based on their own intuition.

"We rehearsed a couple of scenes in the first film and those are the worst scenes in the film. It's good if things are spontaneous. Rehearsing makes it seem fake." That's not saying he doesn't fill the role of adult authority figure. "I'm the one who sets the direction, of course," he says. "But the most important thing is that they can tell I respect them."

Hasselbalch clearly enjoyed returning to the Antboy universe, even if his once so little leads are now teenagers with raging hormones and emotions.

"That's what makes it so much fun. For a teenager, everything is very black and white. There's no in between." That is also how Hasselbalch does Antboy. "We're trying to be very clean with these films. Even if I can see the humorous slant in a situation, I don't use irony. I want to go all in – the funny scenes should be funny and the scary scenes should be scary, too. No leavening the horror by having the villain slip on a banana peel.

"Again, it's about not talking down to children. I remember as a kid how the scary part of a film was really cool. It may have scared me, but at the same time I felt I was being taken seriously. It's like fairytales that way. We know that most fairytales have a happy ending and Antboy's audience knows that the characters in the film will make it. They just have to go through a few things before they come out on the other side."

Revenge of the Red Fury opened in Danish cinemas on 25 December. The film is produced by Eva Jakobsen for Nimbus Film and is enjoying its international premiere in Generation Kplus at the Berlinale. 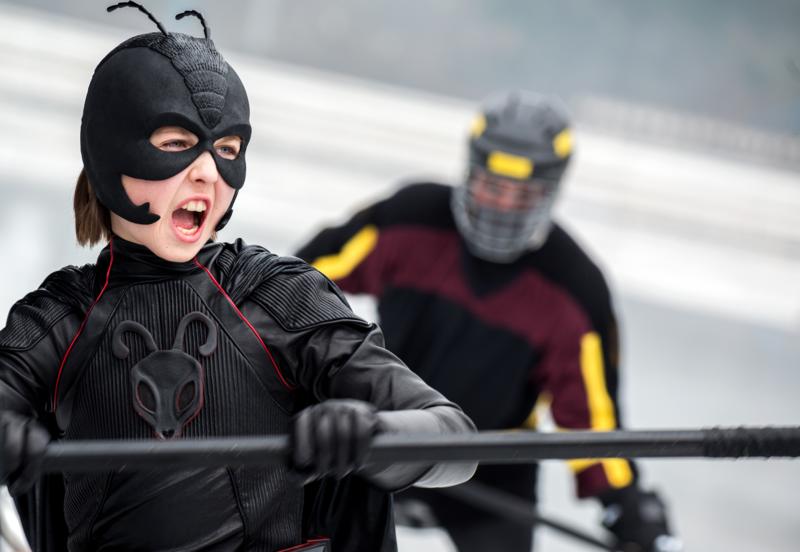