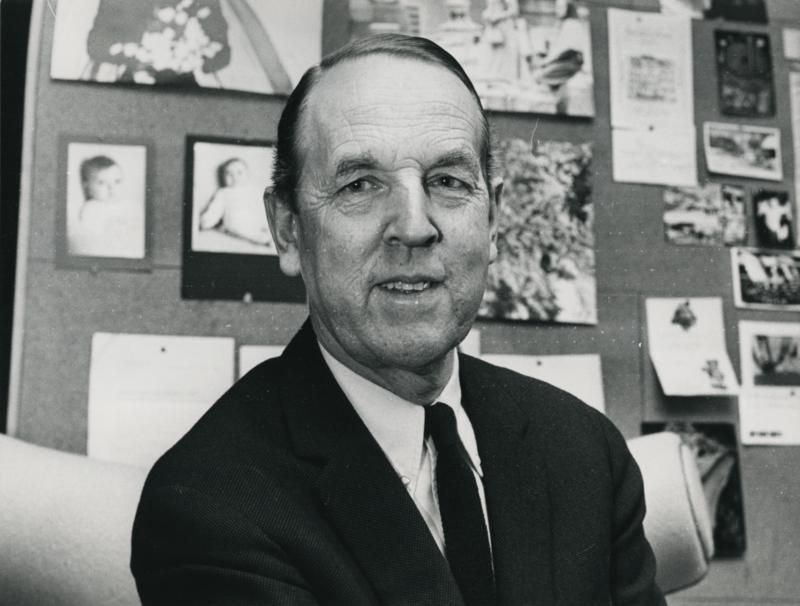 
The German occupation of Denmark had a crucial impact on Mogens Skot-Hansen's career. The Prime Minister's Office was first to point out the power of the German Kulturfilm to strengthen national sentiment. The so-called Employment Film Committee (Beskæftigelsesfilmudvalget) was established under the Prime Minister's Office in 1941 as an umbrella organisation for the government's future, and rather erratic, short-film production. The reins were placed in the hands of a highly enthusiastic, movie-struck head of section at the Ministry of Education, 33-year-old Mogens Skot-Hansen.


Prior to heading the committee, Skot-Hansen had written the script for Johan Jacobsen's exceedingly lightweight feature, "En lille Tilfældighed" (A small Coincidence) (1939). But he was not completely won over by the glory of cinema until he collaborated with Theodor Christensen and Karl Roos on the sophisticated feature "Jens Langkniv" (1940).

Above all, he had a burning passion for the already classic British documentaries. This was evident in his short-film directorial debut, "Vi snakker Færdsel" (Talking about Traffic, 1941 for Dansk Kulturfilm), and his other short from the same year, the completely different "Tørveproduktionen sætter Rekord" (Peat Production Record, for his own office, the Employment Film Committee), which he also wrote. Skot-Hansen also directed and wrote several short films for the Ministries' Film Committee (Ministeriernes Filmudvalg, MFU), as well as two features, in 1942 and 1944 respectively.


Giving Dreyer an international comeback was greatly on Skot-Hansen's mind. He and the director first met at a reception in 1940, and Skot-Hansen was the main force behind Dreyer debuting in 1942 as a director of short films for the government. That fact helped convince Palladium producer Tage Nielsen that Dreyer had learned to be accommodating and was capable of working on a limited budget. Co-writing "Day of Wrath" in 1943, Skot-Hansen put in a big effort on what was Dreyer's first Danish feature since "Master of the House" (1925).

In 1944, the Employment Film Committee became MFU and subsequently served as the official film entity for ministerial film requests. With liberation approaching, Skot-Hansen set his eye on a global perspective for Danish shorts to raise their status on the international market. In partnership with Arthur Elton, the grand old man of British documentaries, Skot-Hansen was in charge of the Danish end of a series of five short films about the Danish welfare state, 'Social Denmark'. Ultimately, the English treatment of "Good Mothers" was only a minor step in Dreyer's resurrection. Also, Skot-Hansen's final attempt to jazz up Dreyer as a dialogue director, with the cheeky voiceover for "Vandet paa Landet" / "Water from the Land" (Dansk Kulturfilm, 1946), did not turn out well.

In 1946, Ib Koch-Olsen became head of both Dansk Kulturfilm and MFU, while Skot-Hansen lived out his international ambitions as head of the UNESCO Film Section in Paris, later becoming the UN film representative in Hollywood from 1949-1954. In 1955, he started the Laterna Film production company, which produced numerous short films as well as a few, generally way too ambitious Danish productions that appealed in vain to the international market, including "King Lear" (Peter Brook, 1971).